The work that distinguishes the Baroque period is stylistically complex, even contradictory. In general, however, the desire to evoke emotional states by appealing to the senses, often in dramatic ways, underlies its manifestations. Some of the qualities most frequently associated with the Baroque are grandeur, sensuous richness, drama, vitality, movement, tension, emotional exuberance, and a tendency to blur distinctions between the various arts. Read more about the Baroque period in the Encyclopedia Britannica

Rococo style originated in Paris in the early 18th century but was soon adopted throughout France and later in other countries. It is characterized by lightness, elegance, and an exuberant use of curving, natural forms in ornamentation. The word Rococo is derived from the French word rocaille, which denoted the shell-covered rock work that was used to decorate artificial grottoes. At the outset the Rococo style represented a reaction against the ponderous design of LouisXIV’s Palace of Versailles and the official Baroque art of his reign. Read more about Rococo style in the Encyclopedia Britannica.

The Empire style in dress also found its inspiration in classical times, at once consciously emulating the rich elegance of pre-Revolutionary France, gowning women to emphasize femininity and grace, in flowing floor-length creations of light fabrics, frequently having trains, that were universally quite décolletté and girdled immediately beneath the breasts. Paris winters demanded warm outer garments, which were numerous and various, among them scarves, stoles, capes, jackets, and overdresses. Men’s fashions of the Empire period featured a cutaway tailcoat revealing a waistcoat and high-collared shirt with cravat, much resembling the tailoring of London.  Read more about Empire style in the Encyclopedia Britannica.

Until about 1820 women’s dress continued to reflect the Neoclassical styles initiated in the era of the French Revolution. These fashions were supposedly based upon the Classical dress of ancient Greece. Ladies wore loose, draped, high-waisted gowns in white or pale colours in imitation of those depicted by white marble statuary. Corsets became less restrictive or were abandoned. Hair was dressed in Classical fashion, usually in a chignon bound with ribbons. The Romantic age of the 1830s brought back more colour, a tighter waistline at a more natural level, fuller skirts, leg-of-mutton sleeves, and complex high coiffures surmounted by large-brimmed hats or bonnets.From the 1840s men’s dress lost most of its colour: black, shades of gray, blue, and white were the norm. The formal black tailcoat was now reserved for evening attire. For daywear, tailcoats of various types were worn with a waistcoat and the new looser style of trousers over boots. Neckwear was plainer, consisting of a collar with neck scarf.

The second half of the 19th century was a time of prosperity in Europe. Despite wars and upheavals, the bourgeoisie dressed fashionably and luxuriously. The styles worn by men and women acted as foils to one another—the men’s dress sombre, dignified, and only slowly changing, the women’s dress colourful and changing ever faster in a kaleidoscope of modes. The technical advances and the capability for mass manufacturing that had been brought about by the Industrial Revolution were making fashionable dress available to a rapidly expanding public. The invention of the sewing machine and the jacquard loom (used for weaving patterned textiles), the development of the ready-to-wear trade, the growth of new marketing techniques, and the establishment of department stores were revolutionizing the fashion scene. Read more about mid-late 19th Century dress in the Encyclopedia Britannica

The in article Renaissance Theatre see the sub-articles:

The International Encyclopedia of Dance:

An Oxford Companion to the Romantic Age: 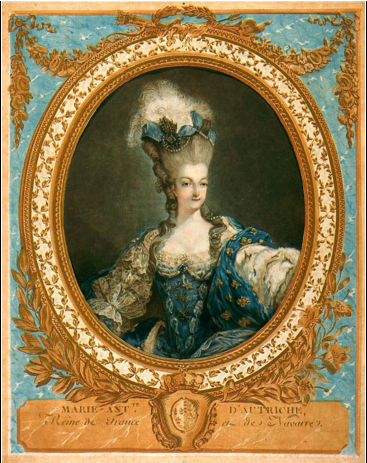 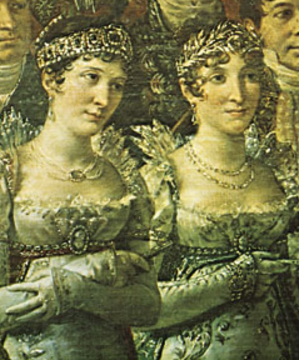 Detail from The Coronation of Napoleon (1807) by Jacques-Louis David. 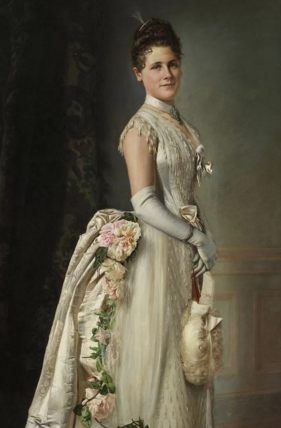 Portrait of an Elegant Lady (1880) by Francois Brunery.