This is a research guide for Robert Frost Stone House Museum 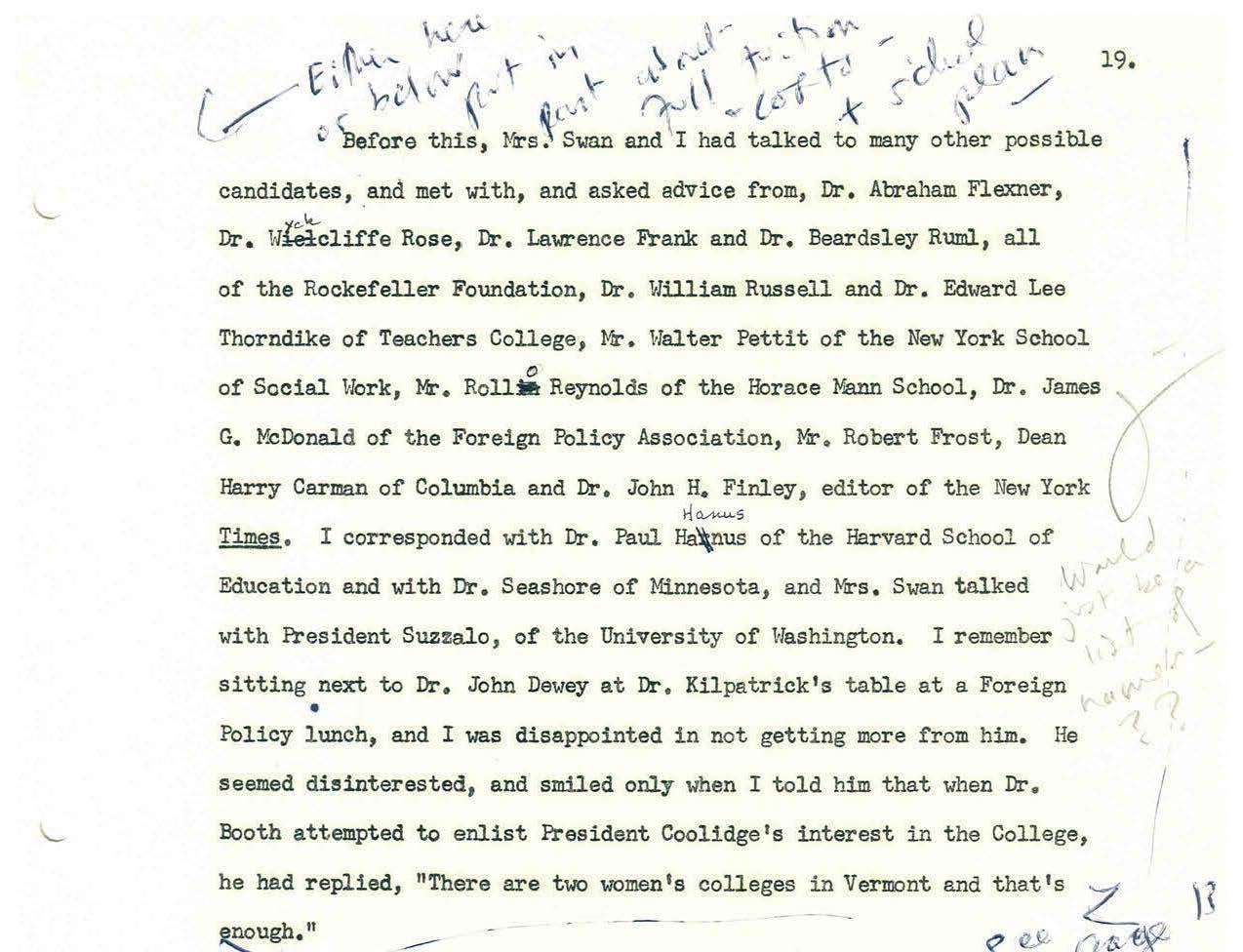 In the large student application for enrollment, the Director of Admissions would choose the student body like choosing an orchestra, having in mind enough different interests and localities to make an inspiring and harmonious group; that the teaching body need not be PhDs or research professors, but chosen rather as inspiring and able teachers, young and dynamic and 39. with democracy of age, rather than the old stodgy teacher-student attitude. This faculty must have an idea of pedagogy. Written reports rather than numerical marks were to be used to record student progress, and I remember Robert Frost saying, "They prefer adjectives to numbers." 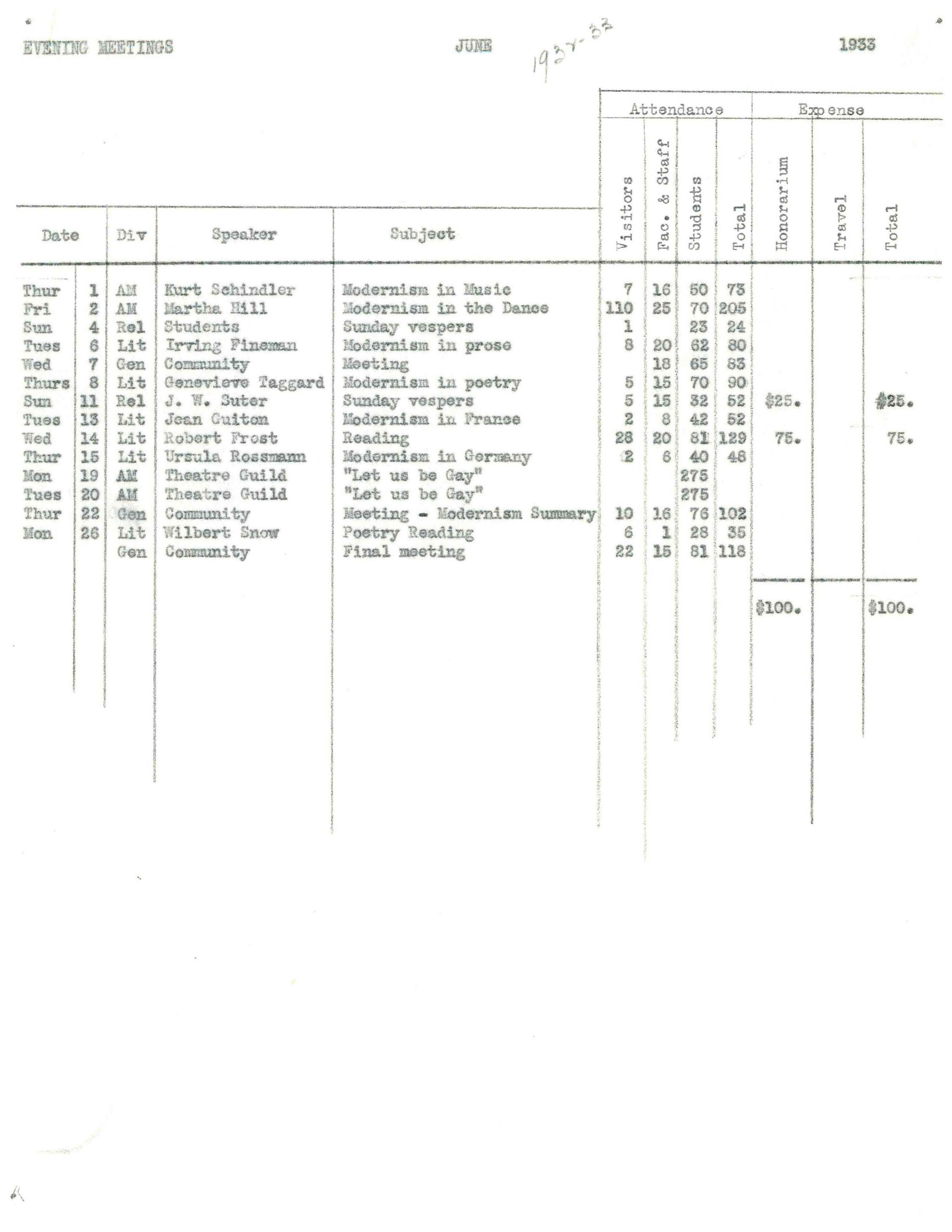 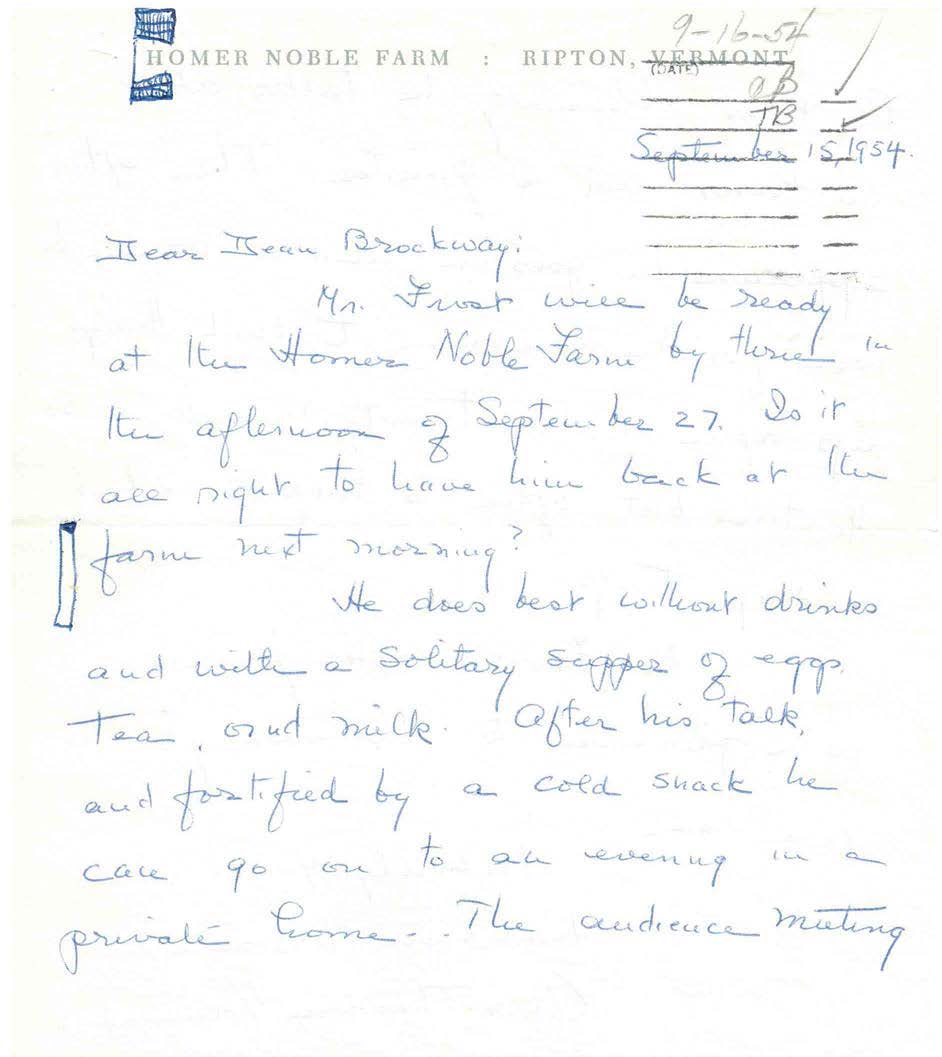 "As Bennington opened its doors to 87 freshmen in 1932 the exuberant star of the Literature Division was Genevieve Taggard, poet, biographer, inspiring teacher and the only member of the Leigh faculty to be included in Daniel Aaron's Writers on the Left. She had been recommended to Leigh by Robert Frost, then living nearby, as a better poet than Frances Frost, a Vermonter unrelated to Robert who was also being considered."

Bennington College: in the Beginning by Thomas Brockway pg 170

Although not a faculty member, Robert Frost hung around the college during Burkhardt's tenure. After finding out Burkhardt was the college president, Frost said to him: "Oh, Bennington, I always say that 'I stamp my foot and up came fire and flames and fumes and Bennington College."

Robert Frost, a member of the Theatre and Arts Committee, is listed in this fundraising brochure.  "The concern of this committee is to raise a fund of $1,000,000 to build and to provide maintenance for a Theatre and Arts Center for Bennington-a building to house talents already at work; facilities to increase the scope of the present program in the performing and visual arts. The need is urgent!" 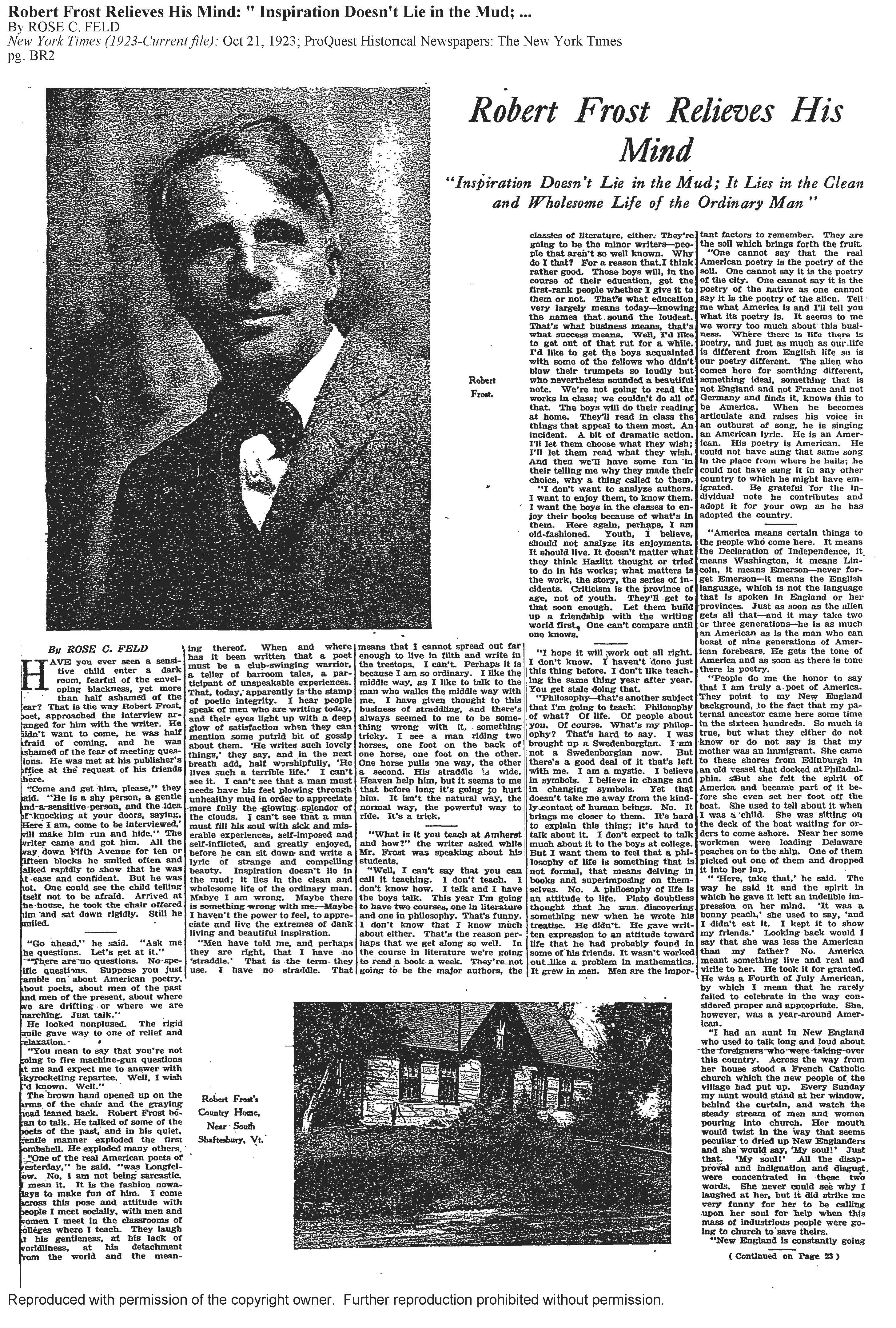 “After waiting all year for the promised appearance of Robert Frost, Bennington College last night welcomed the poet with an enthusiastic audience which filled the Commons lounge.  He read from the large column of his collected poems, and in his reading showed the fundamental difference in tone which distinguishes one poem from another and is the standard by which he judges his own work.  As he turned the pages looking for certain poems he talked casually sometimes telling how a poem and originated or relating experiences he has had while reading in various parts of the country.  Poetry students and other admirers kept him reading and talking until the great log fire in one end of the room had sunk to a read glow.  Then in order not to tire the poet, Genevieve Taggard of the literature department brought the meeting to a close with an urgent request that he come again and sooner next year.” 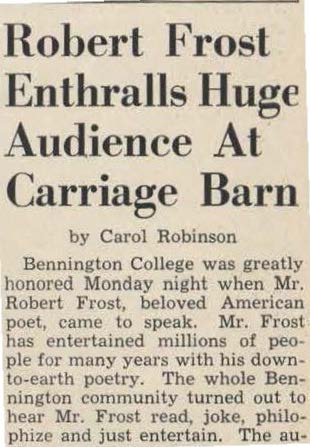 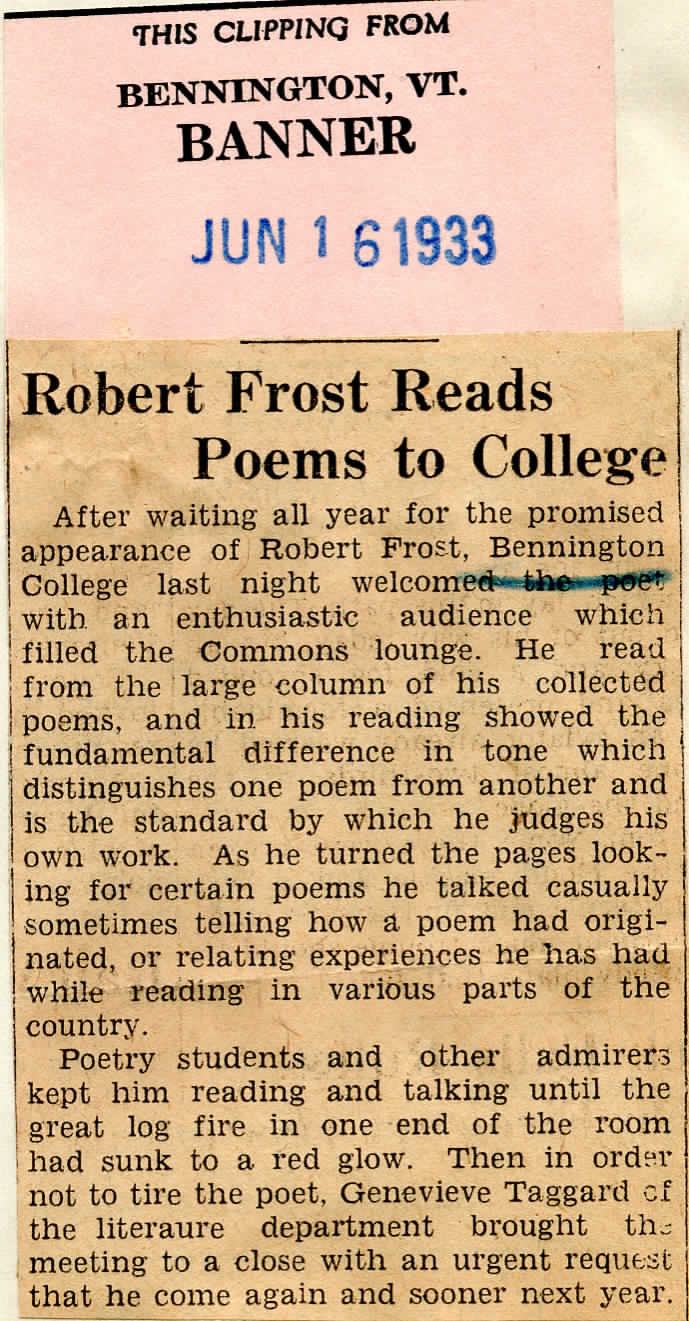 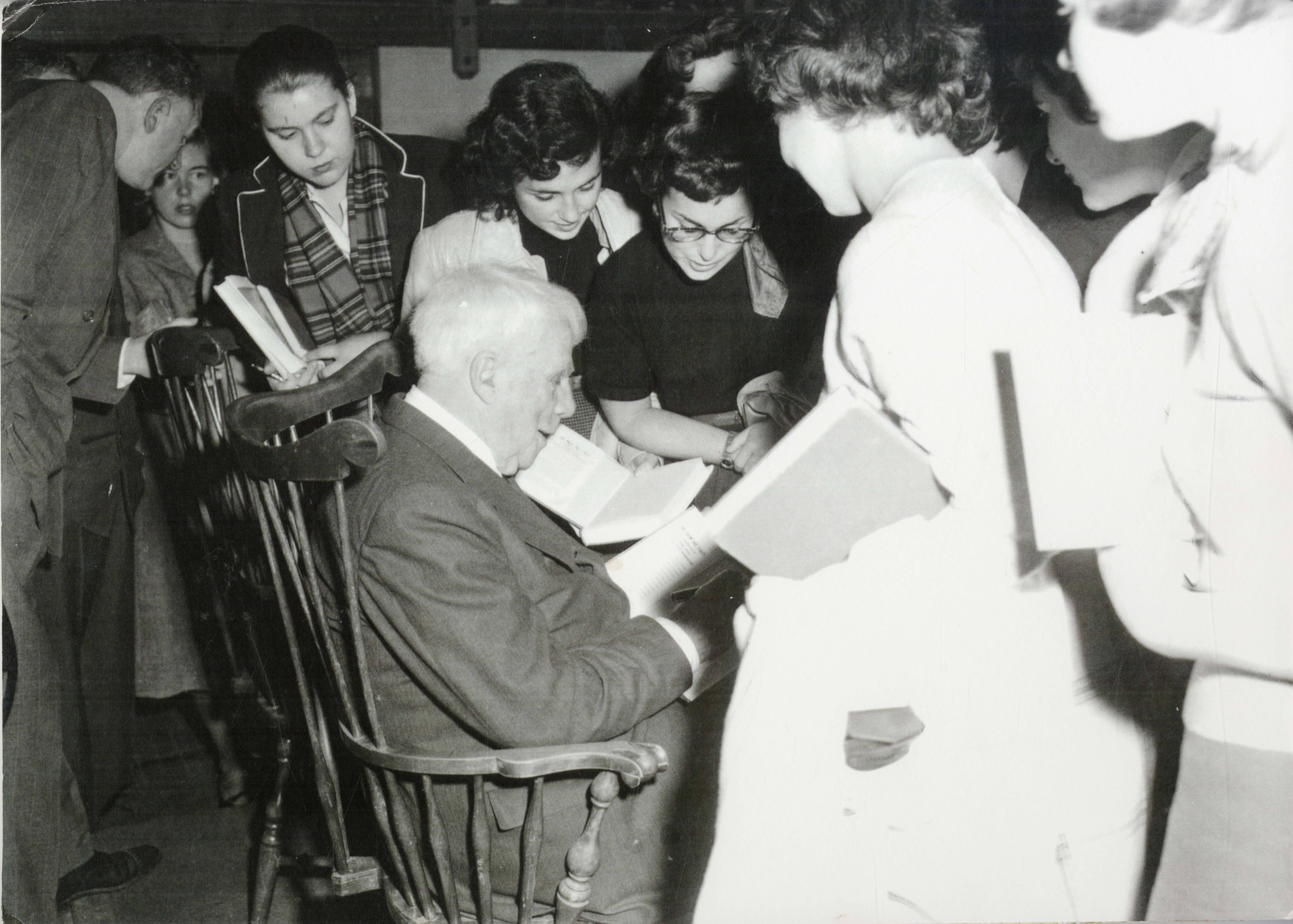 This photograph, from the Robert Frost Collection, was taken at an October, 1954 reading in the Carriage Barn on the Bennington campus. Students appear to have copies of "The Road Not Taken" which he is signing for them. Bennington College President Frederick Burkhardt stands to the left of Frost. The wing-backed chair is the same as chairs used for other Bennington guests, like Peter Drucker and they appear in other photos in the Carriage Barn. The wooden, decorative feature on the wall facing Frost also appears in the Carriage Barn.

"Frost lived in Shingle in 1927, after they gave his son and wife the Stone House as a wedding present."

Robert Frost: the Years of Triumph by Lawrence Thompson