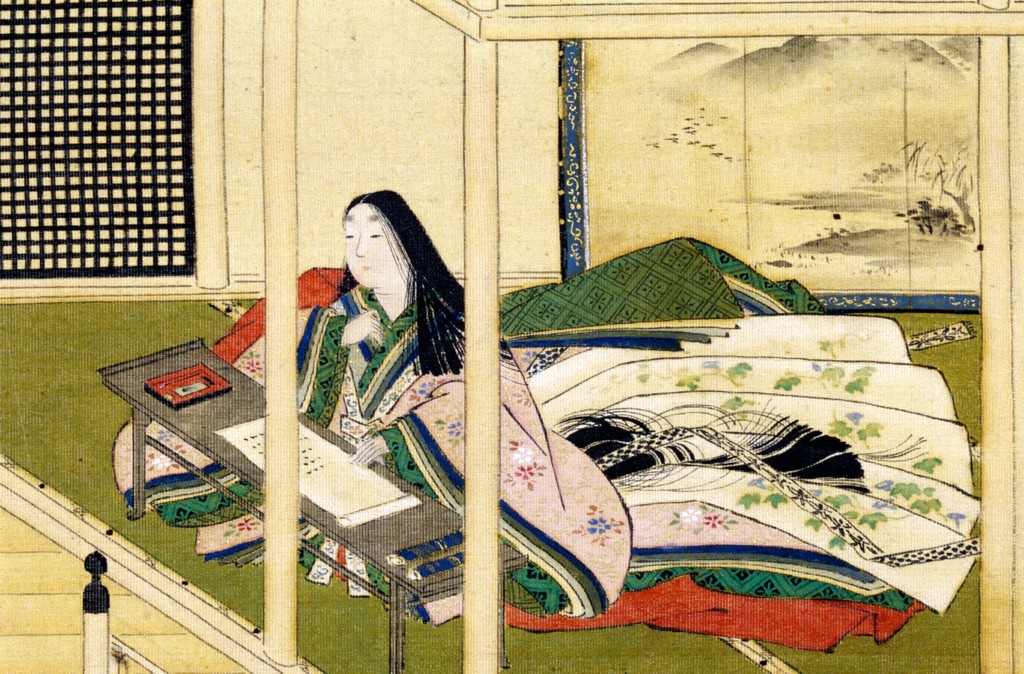 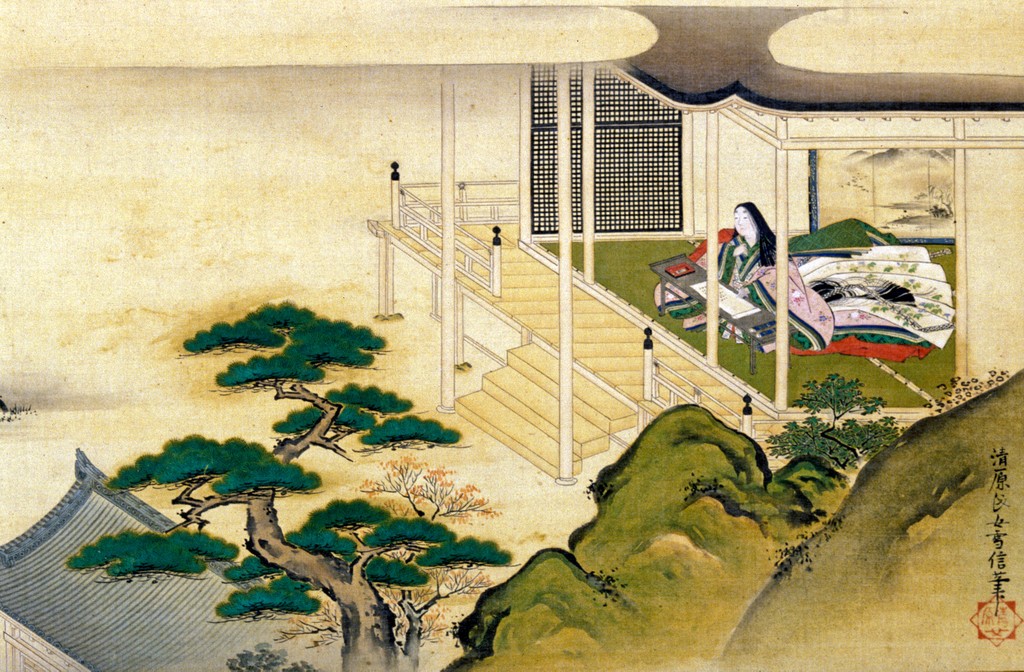 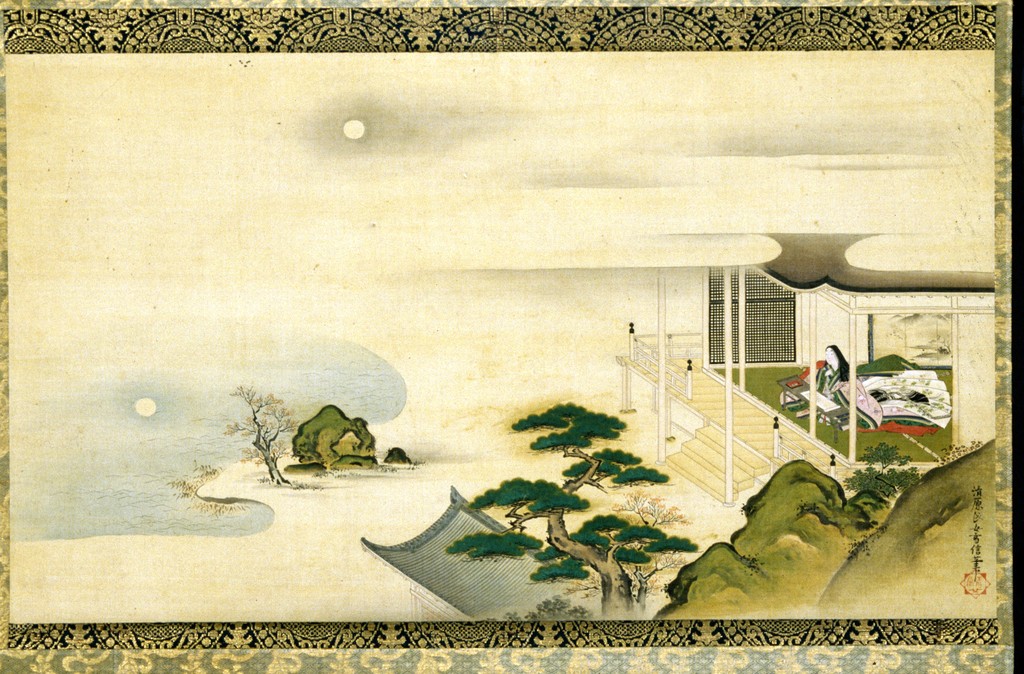 Murasaki Shikibu began her life in the late tenth century when the Fujiwara family dominated politics at the capital of Kyoto. Controlling the posts of chancellor and regent, the Fujiwara permitted the emperors to reign but not rule. Moreover, the Fujiwara influenced the succession to the throne by marrying their daughters into the imperial line. Fujiwara Michinaga, the most powerful family member in the middle of the Heian period (794-1185), married four of his daughters to emperors and was the grandfather of three emperors.

This daughter’s real name is unknown, but history has come to know her as Murasaki Shikibu. Because surnames were uncommon, women frequently were known by names derived from a brother’s or father’s official post. Shikibu, her father’s title, became part of her name and Murasaki (violet or purple) perhaps was derived from the color of the wisteria flower, whose Chinese character made up the first syllable of the name Fujiwara (wisteria plain). Some sources call her Tō Shikibu, tō being another way of reading the first part of Fujiwara.Fujiwara no Tametoki (b. c. 945) was a member of a cadet branch of this clan. A low-ranking member of the court bureaucracy, he was adept in the Chinese Confucian classics and poetry talents he inherited from his father and grandfather, who were literary figures in their own right. Eventually, through the assistance of Michinaga, his powerful kinsman, Tametoki rose to a post in the bureau of ceremonials (shikibu-shō). He married a daughter of Fujiwara no Tamenobu, and about 978, they had a daughter.

Heian women were expected to be educated at home in calligraphy, playing the koto, embroidery, painting, and other feminine arts. Men, on the other hand, were to learn the Chinese classics and the histories in preparation for official careers. Murasaki, however, received a broad education in both the feminine arts and the traditional Chinese classics. In fact, she was better at composition in Chinese than her brother Nobunori. She often delighted her father by quoting from the Chinese histories, composing poems in imitation of Chinese masters, and displaying a command of literature that normally would have been expected only of boys. She also was well versed in Japanese literary genres and Buddhist writings.

In addition, Murasaki was proficient at kana writing. The Japanese, lacking a written script for their language, had borrowed the Chinese system about the time that Buddhism was introduced from the continent (via Korea) in the sixth century. Unfortunately, the Chinese characters, linked as they were to the monosyllabic Chinese syntax, were awkward for expressing the very different polysyllabic Japanese language. As a result, the Japanese eventually used the cursive, written form of certain Chinese graphs for sound value alone. This new syllabary, called hiragana, was used with katakana (a script, also derived from Chinese characters, reserved for writing foreign words) and kanji (Chinese characters). Thus, kana blended three different systems into one written language.

Writing thus became less intimidating; in addition, Japanese ideas could be liberated from Chinese models wedded to the foreign script. Men, however, looked down on using the easy kana syllabaries, preferring to use characters alone in imitating Chinese genres. Women, who were not expected to know Chinese, were given free rein to write in kana, and they experimented with new literary forms to express uniquely Japanese sentiments. In fact, the Heian period marked the emergence of an original Japanese literature liberated from Chinese stereotypes; much of it was produced by talented women such as Murasaki.

When Murasaki’s father was assigned to the post of governor of Echizen, she accompanied him in 996 and evidently spent several years in the provinces. In 999, Murasaki returned to Kyoto to marry Fujiwara no Nobutaka, a man nearly her father’s age. Although her husband had had children by three other women and had a reputation for high-handedness when he was the provincial governor of Yamashiro, their marriage was nevertheless a happy one. In 1001, Murasaki gave birth to a daughter, Kenshi, who would become a poet as well. Soon after, Murasaki’s husband died in an epidemic.

Perhaps seeking consolation for her husband’s death, Murasaki turned to writing. About 1002, she started work on a tale (monogatari) about the romantic escapades of a fictitious character: a handsome, talented son born to an emperor by a low-ranking consort. The hero’s name was Genji (the shining one) and the work was called Genji monogatari (c. 1004; The Tale of Genji, 1925-1933).

Highly cultured and living among the aristocratic class, Murasaki drew on her own experiences, which were augmented by her profound knowledge of human nature, to capture in this story the ambience of Heian life. It is said that her penchant for gossip and her curiosity may have given her access to privileged information about real court personalities, which then became the stuff of her tale; some even suggest that she had an affair with Michinaga. However, such theories do not do justice to her truly creative ability.

Around 1005, Murasaki was brought to court by Michinaga to serve as a tutor and companion to his daughter Shōshi, the nineteen-year-old consort to the Emperor Ichijō (r. 986-1011). Chapters of The Tale of Genji were read at court, and the young emperor once complimented Murasaki on her literary erudition.

Murasaki also kept a diary, Murasaki Shikibu nikki (eleventh century; Murasaki Shikibu: Her Diary and Poetic Memoirs, 1982) and some poetic memoirs (kashū), works that surprisingly reveal little about herself. In one telling remark, though, Murasaki recorded that fellow ladies-in-waiting resented her aloofness. She denied that she was conceited and considered herself a misunderstood, gentle person victimized by court gossip. Her novel was being written not as a self-serving display of her learning but, as she has Genji say at one point, because she “was moved by things, both good and bad,” and wanted “to commit [them] to writing and make it known to other people even to those of later generations.”

While in imperial service, she enriched her impressions of aristocratic life at court and eventually produced more than fifty chapters incorporating, in a fictitious way, what she was observing at first hand. Her Genji epitomized the idealized Heian aristocrat. Adept at all the genteel arts, he romanced a bevy of women by being a cultured lover in a world sensitized to beauty. Included among Genji’s many paramours was one to whom he returned frequently the Lady Murasaki, a sensitive, gentle character perhaps personifying qualities for which the author hoped that she herself would be remembered.

On the surface a book about romantic and sexual love, The Tale of Genji is in reality a complex, almost psychological, exploration of human emotions and relationships. Plot development is minimal, and time references are muted. Karmic retribution and a sense of impermanence seem to bracket the amorous trysts of Genji, making the work a reflective analysis of the human predicament. As the story darkens in its final chapters (one theory holds that they were completed by someone other than Murasaki), the author herself seems to retreat from the glitter of the court, fatalistically preparing for her own end.

It is not known how Murasaki ended her days. Reportedly she retired to a Buddhist nunnery to reflect on the impermanence of the material world, just as many of the characters of The Tale of Genji did. She may have died in her mid-thirties, although some historians say that she lived on to 1025 or 1030. Tradition has it that a certain grave in Kyoto is the site of her burial.

The Heian period was a singular time in Japanese literary history, one in which women writers dominated all genres. Murasaki Shikibu’s contribution was to define the ideal of the cultivated aristocrat Genji living and loving in the effete, rarefied world of courtiers. The Heian sensibility of mono no aware (the pity of things), a feeling that Murasaki vividly depicted in her prose and poetry, permeated this milieu, evoking melancholy enjoyment of ephemeral pleasures; her writings would preserve for generations of readers the pleasure of eavesdropping on an age unsurpassed in cultural richness. Her characters and their emotional responses to one another provided the inspiration for picture scrolls (e-maki), Nō dramas, puppet plays, Kabuki theater, and other art forms celebrating the aesthetic sensitivity that Murasaki codified in Japanese literature.