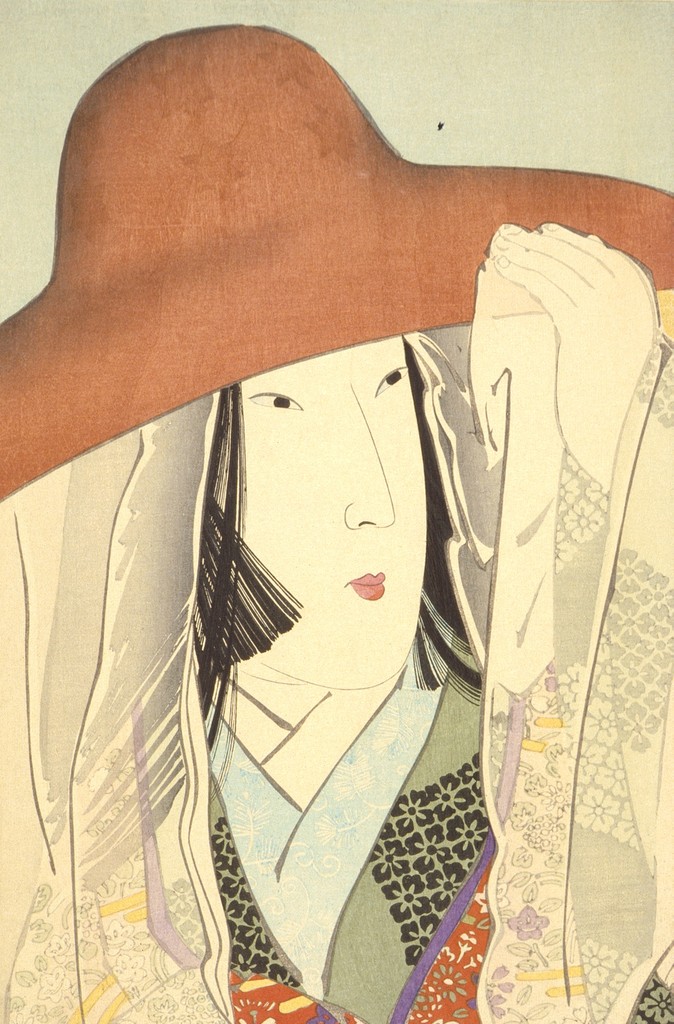 No direct biographical or historical records about Sei Shōnagon have survived; information is fragmentary or conjectural about her life before and after her service at the imperial court, and about possible relationships, marriages, or children. Hints are embedded in her work Makura no sōshi (c. 994-c. 1001; Pillow Book, 1929; best known as The Pillow Book of Sei Shōnagon, 1967, or The Pillow Book) and in comments by contemporaries, especially her literary rival, Murasaki Shikibu.

Sei Shōnagon was born into the Kiyohara family, descendants of the Emperor Temmu (r. 673-686) and a family of some distinction, although by Shōnagon’s lifetime, its influence was primarily literary. Her father, mentioned only once in her work, was Kiyohara no Motosuke, provincial governor of Higo, a poet whose work appears in several imperial anthologies, a scholar, and one of the compilers of Gosen wakashū (951; later collection of poetry). Her great-grandfather, Fukuyabu, was also a celebrated poet. Sei Shōnagon was apparently raised in a literary family, and evidence in her work points to an education in Japanese and Chinese literature. About her childhood and early years, there is no information.

Even Shōnagon’s name is something of a mystery: Sei is the Sinified reading of kiyo, the first character of her family name, and Shōnagon represents an honorary title, “lesser or minor counselor.” The combination was commonly used to refer to ladies of the imperial court and may have been given to her because a male relation held the title of shōnagon. Shōnagon’s given name may have been Nagiko.

In 983, Sei Shōnagon may have married a government official named Tachibana no Norimitsu; the union may have produced a son, Norinaga. Certainly, Tachibana no Norimitsu is mentioned in The Pillow Book, but its translator, Ivan Morris, thinks it unlikely that Shōnagon was married to him, although the pair may have had an amorous relationship. The relationship or marriage did not survive; one legend about Shōnagon is that she then entered a relationship with another man. Although no specifics are provided, The Pillow Book contains evidence that Shōnagon had other intimate relationships, some of which were pleasant, others regrettable.

Sometime between 990 and 994, Sei Shōnagon entered court service as a lady-in-waiting or attendant to Empress Sadako (also known as Teishi), a consort of Emperor Ichijō (r. 986-1011) and the daughter of the powerful Fujiwara Michitaka. It appears that for at least half a decade, Sadako and her circle including Shōnagon shaped the arts and culture at the court. Shōnagon was a favorite of Sadako, a status that the writer repaid through her unabashed devotion to the empress. When Michitaka died, his position as a power broker was taken by his uncle and political enemy, Michinaga, whose daughter Akiko (or Shōshi) first became a concubine to the emperor and then later supplanted Sadako as favored consort. Despite Sadako’s waning influence at court, Shōnagon remained with her mistress until Sadako died in childbirth near the end of 1000.

Some scholars believe that after leaving the court, Shōnagon married Fujiwara no Muneyo, who became governor of Settsu Province, and that she had a daughter, Koma no Myōbu. No definitive information is available on the remaining years of Sei Shōnagon’s life; however, a number of legends have persisted to this day. One tradition claims that she died impoverished and alone; another says that she entered a convent. One scholar suggests that she probably died at Tsukinowa, a suburb of what is now Kyoto, where her father owned a residence. The geographical distribution and prevalence of legends about Shōnagon suggest that she had the means to travel after leaving the court.

The Pillow Book reveals some facets of the personality of Shōnagon, who apparently was a highly intelligent, acutely observant, and well-informed woman whose position as Sadako’s lady-in-waiting afforded unparalleled access to the activities, opinions, attitudes, and concerns of the Heian aristocracy. The book introduces a witty writer who takes pleasure in words and in the language and imagery of poetry, a flamboyant woman who revels in celebrations and festivals and in court pageantry and protocol. Shōnagon’s sensitivity to beauty shines through descriptions of the natural charms of her surroundings, in delineations of colors and textures in clothing, and in notes about harmonious design elements in homes and public buildings. Especially obvious is Shōnagon’s joy in being a member of the court. She adored the imperial family, especially the empress Sadako, and was a favored member of the empress’s inner circle.

Murasaki Shikibu, a contemporary of Shōnagon and the author of Genji monogatari (c. 1004; The Tale of Genji, 1925-1933), was not among Shōnagon’s admirers. In her diary, Murasaki complained that Shōnagon had an excessively good opinion of herself in translation, the criticism is variously rendered “conceit and arrogance” or “self-satisfaction.” Murasaki was introspective and philosophical, and her dislike of the gregarious and showy Shōnagon is not surprising. In general, the criticism should be read as an opinion from a rival whose personality was decidedly different. There may, however, be a germ of truth in Murasaki’s description of Shōnagon.

Scholars and readers who are charmed by the elegance and cleverness of The Pillow Book are frequently taken aback by Shōnagon’s intolerance for those whom she considered beneath her, socially, economically, or intellectually. She writes of women “who are of no more value than a roof tile” and complains that it is annoying “to be disturbed by a herd of common people.” Comments such as these are not uncommon; however, although her elitism is discomfiting, contemporary readers must remember that Shōnagon was a product of her upbringing and historical milieu; her values mirrored those of the courtiers around her.

Although she wrote both prose and poetry, Shōnagon is celebrated for The Pillow Book. Probably begun around 994 while Shōnagon was in Sadako’s service, the work was completed sometime after the writer left the court, possibly around 1001. The Pillow Book is significant in Japanese literature, praised for its linguistic purity, celebrated for its variety, and still widely read more than a thousand years after its composition.

The greatest Heian period (794-1185) literature flowered during the late tenth and early eleventh centuries, the years under Emperor Ichijō, during which Sei Shōnagon and Murasaki Shikibu served successive consorts at the imperial court. Dominated by the great Fujiwara family, those years were noted for their cultural and artistic achievements, for tremendous literary production, and for the development of new genres and literary subjects. The major writers of Ichijō’s reign were women, including Izumi Shikibu, hailed as the era’s greatest poet; Murasaki Shikibu, known for her diary and The Tale of Genji; and Sei Shōnagon.

Evidence in The Pillow Book suggests that its existence was known, and the creation of manuscripts many centuries later speaks to the work’s enduring popularity. So iconic was The Pillow Book in the ensuing centuries that a fourteenth century artist created the Makura no sōshi e-maki, a scroll ornamented with scenes and events from Shōnagon’s book.

The Pillow Book consists of more than three hundred entries (the number varies among manuscripts) covering the years Shōnagon spent at court. As the only work of its kind surviving from the Heian period, The Pillow Book is not only a literary masterpiece but also a vast resource for cultural historians interested in the court of a Heian emperor.

The title of Shōnagon’s work may not have been of her choosing. The term “pillow book” was commonly used at the time for an informal journal containing jottings and observations composed in solitude. These books were kept private, probably in small drawers built into wooden pillows, hence the label. Because The Pillow Book consists of pieces, apparently composed spontaneously and irregularly, it is impossible to determine except for some fifty dateable sections when and in what order the entries were written. Extant manuscripts from long after Shōnagon’s death disagree on the arrangement of the various sections in the book.

Several early texts of The Pillow Book exist, but none of them dates back to Shōnagon’s lifetime. As later revisions or editions, these manuscripts vary in the placement of Shōnagon’s entries; yet whatever the order, they each fit into one of several fairly distinct categories: essays on a variety of subjects, essays on emotions and feelings, short observations and musings, and autobiographical vignettes that reveal not only Shōnagon’s life at court but also fragments about her life before she entered Sadako’s service.

Among the prose forms represented in The Pillow Book are short tales, personal narratives, reflections, anecdotes, descriptions of nature, character sketches, vignettes, standard diary entries, prose poems, and commentaries. Also included are sixteen poems, although most scholars agree that Shōnagon’s genius lay in her facility and deftness with prose forms, and that her poetry is, at best, pedestrian. Topics covered in The Pillow Book vary tremendously, appearing random and haphazard; Shōnagon writes about chance encounters, amorous intrigues, politics, ceremonies, festivals, fashion, men, penmanship, and food. She comments on serious subjects: class and gender relations, court attitudes and values, social hierarchies, and the shape of life in her aristocratic universe. Yet she is also playful and informal, describing the emperor playing his flute, lovers’ visits, and the origins of names. She illuminates the lives of women those of her class and those below her their activities, cosmetics, clothing, apartments, pastimes, and even their faces. Her descriptions of the natural world trees, birds, flowers, even insects are delicate and painterlike.

A striking feature of The Pillow Book are 164 delightfully personal lists interspersed throughout the work. Shōnagon enumerates the hateful or depressing, the annoying or awkward; she details the elegant, adorable, splendid, or rare. She lists “Poetic Subjects,” “Things That Arouse a Fond Memory of the Past,” “Things Without Merit,” and “Things That Give a Pathetic Impression.” Some lists are brief, with two or three items; others are extensive and detailed. The lists are quirky, always engaging and revelatory of Shōnagon’s personality and thoughts.

Through The Pillow Book, Sei Shōnagon influenced the development of the genre known as zuihitsu (literally “following the pen”), an anthology or miscellany whose elements lack a formal arrangement and that has an air of spontaneity and of having been composed on the inspiration of the moment. The Pillow Book opens a window into a medieval Japanese royal court, revealing glimpses of the human beings behind historical personages such as Emperor Ichijō and his consort Sadako.