Reading and Writing: Hybrid-Genre Works: Elizabeth A. I. Powell

Elizabeth A.I. Powell was born in New York City. She earned her BA from the University of Wisconsin, Madison, and her MFA from the Vermont College of Fine Arts. She is the author of the poetry collections The Republic of Self (2001), which won a New Issues Poetry Prize, and Willy Loman’s Reckless Daughter or Living Truthfully Under Imaginary Circumstances (2016), winner of an Anhinga-Robert Dana Prize for Poetry and a “Books We Love 2016” pick by the New Yorker.

Powell is the recipient of a Pushcart Prize, a grant from the Vermont Arts Council, and a fellowship from Yaddo. An editor of Green Mountains Review, she is associate professor of writing and literature at Northern Vermont University and on the faculty of the low-residency MFA programs at the University of Nebraska, Omaha, and the Vermont College of Fine Arts.

Elizabeth A. I. Powell 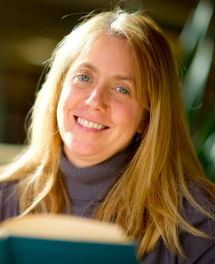