You Will Always Be Someone From Somewhere Else

Dao Strom is an artist whose work explores hybridity through melding disparate “voices”—written, sung, visual—to contemplate the intersection of personal and collective histories.

In considering “voice”, or that which seeks to be voiced, as an immateriality that cannot be contained or definitively conveyed via any one body—any single medium or context—Strom’s work concerns itself with the necessity of polyvocality and mutability, in terms both of content and form. This uncontainability, characteristic of hybrid and diasporic identities, lends itself also to a contemplation of fragments and fragmentation—of/within selves, histories, cultures, groups of people, and places.

Her primary material is language—which may articulate as text, music, image, sound, space, silence, and the intersections and juxtapositions of these elements in relation to one another. Although separate and multiple, these elements are yet unified by a shared (under)current that transposes itself through or despite its conduits; the endeavor being one toward “re-membering” and attempting to synchronize the divided ‘languages’ within the self and concerning the self as placed in the world. Using practices of fragmentation and (re)assemblage, Strom ‘writes’ arrangements of poetry, image, fragments, song, and sound, layering voices and their echoes, on the page and aurally, to be experienced as installation, performance, music, multimedia, and, more intimately, inside the spaces of a book. Reaching beyond a literate experience of reading, Strom’s work seeks to touch upon the ethos, textures, rhythms and musical frequencies involved in reading and receiving language(s). She explores these concepts in both solo and collaborative work formats.

Strom is a founding member of She Who Has No Master(s), a collective project of women artists and writers of the Vietnamese diaspora, co-facilitator of a PoC library collective/social engagement project, De-Canon, and the editor of diaCRITICS.

She makes music as The Sea & The Mother and is the author of five books/works: a bilingual poetry/art book, You Will Always Be Someone From Somewhere Else, (Hanoi: AJAR Press, 2018), a hybrid-form memoir, We Were Meant To Be a Gentle People, accompanied by a song-cycle, East/West (Press Otherwise, 2015), a collection of novellas, The Gentle Order of Girls and Boys (Counterpoint Press, 2006), and a novel, Grass Roof, Tin Roof (Houghton Mifflin/Mariner Books, 2003).

She is a 2016 recipient of a Creative Capital Artist Award in Literature. Her work has also received support from RACC, Oregon Arts Commission, National Endowment for the Arts, James Michener Fellowship, and the Nelson Algren Award; with creative place-making grants from APANO (Asian Pacific American Network of Oregon) and the Precipice Fund.

She has performed at the Time-Based Arts Festival and presented collaborative work at the SF Asian Art Museum and the American Library in Paris, among other venues.

Strom was born in Vietnam and grew up in the Sierra Nevada foothills of northern California. She lives in Portland, Oregon. 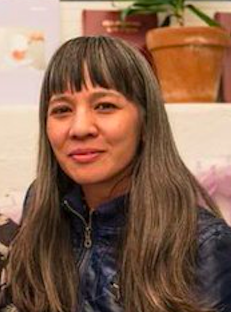