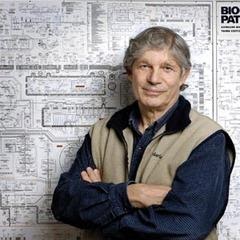 Stuart A. Kauffman, M.D. is an American theoretical biologist and complex systems researcher concerning the origin of life on Earth. He is best known for arguing that the complexity of biological systems and organisms might result as much from self-organization and far-from-equilibrium dynamics as from Darwinian natural selection, as well as for applying models of Boolean networks to simplified genetic circuits.

Stu graduated from Dartmouth in 1960, earned his BA (Hons) at Oxford University in 1963, and completed a medical degree (M.D.) at the University of California, San Francisco in 1968. After completing his residency in Emergency Medicine, he moved into developmental genetics of the fruit fly, holding appointments first at the University of Chicago, then at the University of Pennsylvania from 1975 to 1995, where he rose to Professor of Biochemistry and Biophysics. He held a MacArthur Fellowship, 1987–1992.

He rose to prominence through his association with the Santa Fe Institute (a nonprofit research institute dedicated to the study of complex systems), where he was faculty in residence from 1986 to 1997, and through his work on models in various areas of biology. These included autocatalytic sets in origin of life research, gene regulatory networks in developmental biology, and fitness landscapes in evolutionary biology. Stu holds the founding broad biotechnology patents in combinatorial chemistry and applied molecular evolution.

In 1996, Stu started BiosGroup, a Santa Fe, New Mexico-based for-profit company that employed complex systems methodology to attempt to solve business problems. BiosGroup was acquired by NuTech Solutions in early 2003. NuTech was bought by Netezza in 2008. From 2004 to 2009, he held a joint appointment at the University of Calgary in Biological Sciences and Physics and Astronomy. He is also an Adjunct Professor in the Department of Philosophy at the University of Calgary. He is an iCORE (Informatics Research Circle of Excellence) chair and the director of the Institute for Biocomplexity and Informatics. In January 2009, Stu became a Finland Distinguished Professor (FiDiPro) at Tampere University of Technology, Department of Signal Processing. The appointment is until the end of 2012. The subject of the FiDiPro research project is the development of delayed stochastic models of genetic regulatory networks based on gene expression data at the single molecule level. In January 2010, he joined the University of Vermont faculty where he continued his work for two years with UVM's Complex Systems Center.