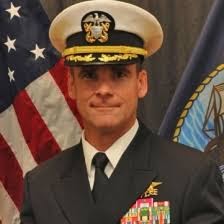 CAPT (Ret) Veazie is assigned to the National Counterterrorism Center where he leads a team exploring the future of terrorism and researching and producing whole of government counterterrorism assessments. He was born in Washington D.C. and earned a Bachelor of Science degree in Marine Science from the University of South Carolina and was commissioned in 1986. After commissioning he reported to Basic Underwater Demolition/SEAL training and graduated in Class 140. Veazie completed a 30 year career as a Naval Special Warfare (NSW)

SEAL officer and where he served in east and west coast SEAL Teams and deployed to over fifty countries around the globe. He led Naval Special Warfare formations in the execution of combat and peacetime special operations missions in Latin America, Europe, Africa, the Western Pacific and the Middle East. Command tours include SEAL Team SEVEN in San Diego, Naval Special Warfare Unit THREE in Bahrain as well as duty as Commodore, Naval Special Warfare Group FOUR in Virginia Beach.

He served in numerous staff assignments that include the Executive Director of Joining Forces in the Office of the First Lady at the White House, personnel policy at the Bureau of Naval Personnel, the Assistant Chief of Staff for Resources, Requirements, and Assessments (J8) for the Commander, Naval Special Warfare Command and in the Operations Directorate (J3) on the Joint Staff at the Pentagon. Decorations include the Legion of Merit (3), the Bronze Star, Defense Meritorious Service Medal (2), Meritorious Service Medal (3), and various other awards. He is also a 2003 Graduate of the National War College earning a Master’s Degree in National Security Strategy.

Todd has been married to his bride Vanessa for 26 years. They live in Alexandria, VA.