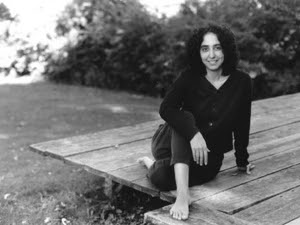 Susan Sgorbati has been involved in the field of dance for over thirty years as a choreographer, artistic director, dancer, and teacher.  Since 1983, she has been on the Dance Faculty  at Bennington College in Vermont where she  has co‐taught numerous interdisciplinary  courses with biologists, musicians, visual  artists, and anthropologists. Her focus on  dance improvisation for performance coalesced into an on‐going research into the  relationship between dance and music  improvisation and the science of complex systems, which she named Emergent Improvisation  (EI). Her initial meetings, a decade ago, with  eminent scientists in the field of complexity, Dr. Bruce Weber, Dr. Gerald Edelman, and Dr. Stuart Kauffman, inspired the direction and naming of her work.  She sustains dynamic on‐going dialogues with Stuart Kauffman, who appears in her recent film “Emergent Forms”, a collaboration with film-maker Elliot Caplan, “Beach Birds for Camera”, “Cage and Cunningham”).

These interactions have taken many forms: co‐teaching and co‐authoring a paper with Dr. Weber; winter residencies (2004 to 2006) at The Neurosciences Institute in La Jolla, California under the tutelage of Dr. Edelman, where her Emergent Improvisation Project (EIP) performance was heralded by The San Diego Union‐ Tribune as one of the “Top 10 Performances of 2006;” presentation of collaborative research with Dr. Kauffman at a symposium sponsored by The National Endowment for the Arts and The National Science Foundation in Washington, D.C., 2010, and participation in Dr. Kauffman’s complexity‐focused interdisciplinary Crazy Salon at the University of Vermont.

Her dance work has been presented at many venues and festivals in New York City and New England. In 2006, Sgorbati received a National Performance Network Creation Fund Grant to develop and tour original performance work (Emergent Improvisation Project). In 2011, she was granted a Creative Research Residency at the Experimental Media and Performing Arts Center (EMPAC) at Rensselaer Polytechnic Institute to explore her new research on “emergent structuring.”

Parallel to her dance career, Sgorbati is currently the Director of The Center for the Advancement of Public Action at Bennington College. This program oversees four initiatives: Human Rights and Peacebuilding, the Environment (Water, Food, Energy), Art in the Public Realm (CAPA Improvisation is a program in this initiative) and Activating Democracy.  Sgorbati is a professional mediator with extensive training and expertise in both multi‐party and environmental dispute resolution for which she has received numerous honors and awards. Since 1999 she has mediated cases for the Vermont Human Rights Commission and holds The Barbara and Lewis Jones Chair for Social Activism at Bennington College.  Sgorbati began implementing the communication structures of Emergent Improvisation in her conflict resolution practice on a recent trip to the Middle East and has recently written a new essay called, “Solving The Impossible” that is to be published in Urdu in Pakistan next year.